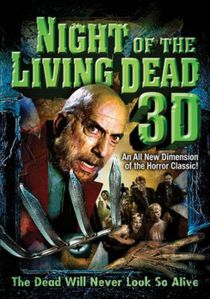 The Bottom Line – A modern retelling of the Romero classic, this is just another run of the mill zombie attack gig, minus suspense, horror and talented actors. Director Jeff Broadstreet is a far cry away from Romero’s sense of dread with a message.

Guest Guide Review – I think we all decided after Tom Savini’s excellent remake of Night of the Living Dead, anything that could be added to an already amazing film had been done… and done right. It makes me wonder if the people behind the newest remake thought about what they were trying to accomplish or simply saw dollar signs floating across the screen. It pains me to say that too, because any small film that finds its way to a theater has probably gone the distance to get there. Alas, this travesty is not really worth feeling bad over.

Ben, who was originally played by the wonderful actor Duane Jones, is not much more than eye candy here. I don’t know why they opted to cast the part with a Caucasian actor (Joshua DesRoches), but it’s really a minor quibble as this film doesn’t seem to be allegorical of anything. It also allowed Barb (Brianna Brown) to have a less controversial love interest.

The pacing is lackadaisical and is only assisted further but the monotonous Johnny One Note performances. I will give credit to Greg Travis who is so hilariously awful that at least he’s entertaining. Haig is the best of the bunch, but he’s not given much to work with.

But what about the 3D effects, you ask? They are pretty boring, unintentionally amusing and very, very sparse. Someone said to me as we left the theater, “George Romero is going to kill himself just so he can roll over in his grave.” I concur.